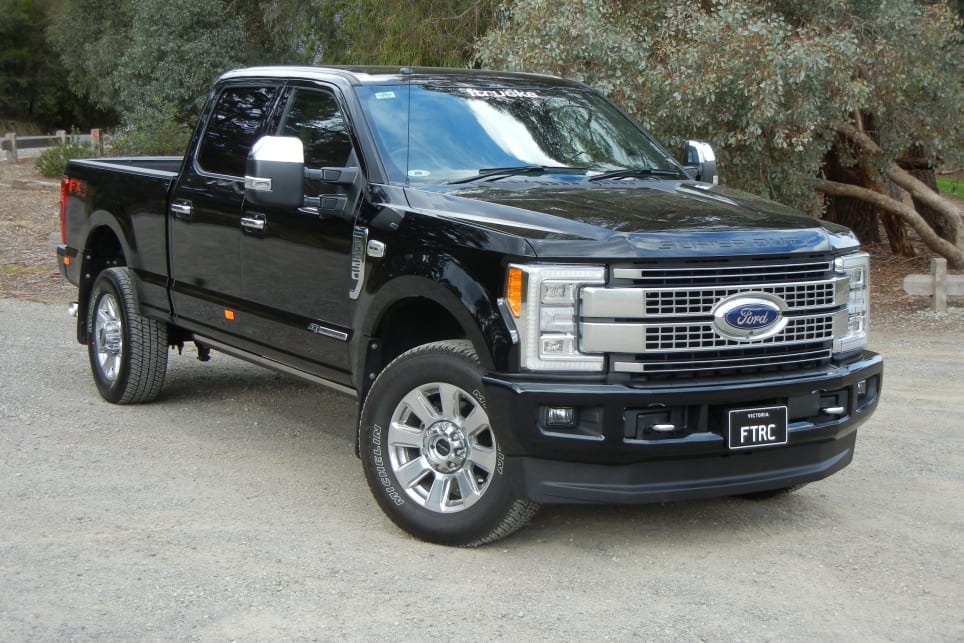 Ford’s legendary F-Series has been America’s best-selling truck for more than four decades. A major factor in that success is the Super Duty range (F-250/F-350/F-450), which reports for duty when loggers, landscapers, miners, oil-field workers and anyone else with seriously heavy on- and off-road load-hauling requirements needs more than the entry level F-150 can deliver.

Not surprisingly, such extreme-duty towing is also required in Australia, particularly by tradies with heavy equipment, and/or for recreational and sporting pursuits that involve multi-axle caravans, horse floats, boat trailers and the like. Some of these large trailers feature a goose-neck design which requires a prime mover-style turntable coupling mounted in the cargo tub.

There are a number of small volume importers which cater for these specialised requirements, including Harrison F Trucks at Melton in Melbourne’s outer west. Harrison provides ADR-approved right-hand drive conversion, local certification and sales/after-sales service for these American giants, one of which we recently sampled for a few days to see what life is like in the world of the Super Duty.

Does it represent good value for the price? What features does it come with?

Our test vehicle was the MY18 F350 SWB Crew Cab Platinum 4×4 pick-up, downrated to a 4490kg GVM rating (same as the F-250) to allow it to be driven with a normal car licence. According to Harrison, Ford achieves this by simply removing an additional booster spring and block in the rear suspension, resulting in the lower ratings. It was also fitted with Ford’s FX4 off-road option (rear diff lock, skid plates, special shocks, hill-descent control), bringing the drive-away price to an eye-watering $165,990.

The Platinum is one of six grades in the Super Duty range, and one of three only available in the Crew Cab, in which it represents the middle tier above King Ranch and below Limited. Although Harrison can import most of the Super Duty model grades, it claims the Platinum delivers the best ‘bang for buck’ in terms of features and trim level, riding on stylish 20-inch polished alloy wheels and LT245/75Rx17E all-terrain tyres with a full-size spare.

As you can imagine, the sumptuous Platinum has power everything and is loaded with features that are way too numerous to list here. Suffice to say, everywhere you look there’s conspicuous luxury, from the moment the concealed power-operated side-steps smoothly extend when you open the door, and then retract when you close it.

Inside is an 8.0-inch touchscreen for the SYNC3 voice-activated infotainment system with multiple connectivity options, including Apple CarPlay and Android Auto, premium leather seating (with heating, cooling and even massage for the front seats), a full-length panoramic sunroof, huge power-extendable door mirrors for towing (with built-in courtesy lights), power adjustable pedals and steering wheel (which is also heated), remote-opening tailgate with fold-out step, cameras everywhere for 360-degree coverageand even a wide choice of changeable colours for the ambient cabin lighting.

Inside is an 8.0-inch touchscreen with Apple CarPlay and Android Auto.

We could go on, but you get the picture. It’s magnificent excess in the true US tradition, where too much is never enough.

Is there anything interesting about its design?

Needless to say, the MY18 F350 Super Duty 4×4 is a monster, even in this SWB specification. The massive 4059mm wheelbase is 839mm longer than a Ranger Wildtrak, which is also dwarfed by the Super Duty’s 6350mm overall length (961mm longer). The F-Series’ 2032mm width is 182mm wider than the Ranger, and its 2065mm height is 217mm taller. It’s like a Ranger that’s been fed heaps of fertiliser.Underneath is the kind of heavy-metal hardware needed to justify a Super Duty badge. Ford claims its massive fully-boxed steel ladder-frame chassis is up to 24 times stiffer than the previous generation, along with improved corrosion resistance. The cargo tub is made from military-grade aluminium with the dual benefits of less weight and no rust. A tough spray-on cargo tub liner boosts dent and weather protection.Live axles are used at both ends, suspended on huge leaf spring packs at the rear and softer-riding coils up front. Steering and four-wheel disc braking are both power-assisted, of course, and there’s a choice of trailer-towing hitches available.

Live axles are used at both ends, suspended on huge leaf spring packs at the rear and softer-riding coils up front.

As you would expect, cabin space for both front and rear occupants is palatial, with even tall adults feeling dwarfed by its enormous dimensions. Rear passenger leg and shoulder room even for tall adults is limousine-grade, although headroom is reduced (but still adequate) due to the lower roof lining surrounding the full-length sunroof.The overall fit and finish of the dashboard, following Harrison’s local RHD conversion process, displays quality workmanship. However, some DNA from its Kentucky birthplace remains in the control screen’s software, which, for example, displays 911 Assist instead of 000, and a left-side driver’s seat icon for the massage control. We also noticed that the AM radio station display only moves in 10kHz increments without the ability to tune between them (too bad if you like talkback).There’s also no driver’s left footrest and the parking brake pedal seems overly high, requiring the raising of your left knee above steering-wheel height to get your boot on it.

How practical is the space inside?

The sumptuous cabin has plenty of storage options, including a single glovebox, and a bottle holder and two storage bins in each front door. The centre console has an open storage cubby at the front, another open storage bin and two bottle holders in the centre, a cavernous box behind that with a padded lid which doubles as a comfortable armrest, and two more bottle/cup holders at the back.

Those in the rear seat also get a fold-down centre armrest with two pop-out cup holders and each rear door has a bottle holder and two storage bins. There are also flexible storage pockets on the rear of both front seats and the 60/40-split rear seat base cushions swing up through 90 degrees and lock into position, revealing a huge full-width storage area underneath.

Those in the rear seat also get a fold-down centre armrest with two pop-out cup holders.

What are the key stats for the engine and transmission?

The F350 Super Duty is powered by Ford’s common rail 6.7-litre Power Stroke V8 turbo diesel, which, with four valves per cylinder and variable vane turbocharger, punches out 335kW at 2800rpm and a massive 1267Nm of torque at only 1800rpm.The SelectShift six-speed automatic transmission is also designed and built by Ford. Its triple-plate, two-stage torque converter offers full lock-up capability as low as 900rpm, and there’s a dedicated tow/haul mode which avoids unwanted shifts on climbs and provides powerful engine braking on descents.

The exhaust brake can also be manually selected. The 4×4 system is part-time dual-range, with auto-locking front hubs and shift-on-the-fly engagement.

How much fuel does it consume?

Flick through a Super Duty sales brochure and you won’t find any reference to fuel economy ratings. However, for what it’s worth we crunched some figures at the end of our relatively short 200km test based on trip meter and fuel bowser readings, resulting in a reasonable 15.8L/100km.That’s not far away from the dash read-out at 14.2, so with its big 130-litre fuel tank you could expect a driving range of around 820km.

You sit up nice and high in very comfortable seats, with a commanding view of surrounding traffic and the road ahead. We quickly adapted to the width and height of the Super Duty, but the major issue in city and suburban driving was its oil-tanker length, which required later turn-in on tight corners to provide kerbside clearance. We also needed to check that there was ample reversing room when choosing a space in a parking lot, to ensure we didn’t get wedged when trying to leave.With the big turbo diesel V8’s 1267Nm of torque being tapped at only 1800rpm, it provides spirited getaways from traffic lights, and easily keeps up with normal city and suburban traffic flow with your big toe barely touching the accelerator pedal.The ride quality without a load is quite good on smooth surfaces, with its massive 3.5 tonne kerb weight feeling like the tyres are leaving indents in the bitumen. However, over rougher roads and larger obstacles like speeds humps, it starts to bounce around more and can feel quite ponderous at times. However, this is to be expected in an empty vehicle with such high payload and tow ratings.The steering is surprisingly direct and firm in feel. It’s also quite linear in turning weight regardless of road speed, without the more noticeable changes evident in its little brother Ranger, which is very light at parking speeds but gets noticeably firmer as speeds increase.Braking is reasonably responsive but like other giant US pick-ups we’ve tested, you have to get them quite hot to make them really bite. That’s because their pad compounds tend to be on the hard side, given they have to cope with the high temperatures generated by heavy-duty towing.The engine exhaust brake is surprisingly quiet and very effective at slowing the vehicle, aided by more aggressive downshifts in the six-speed auto.

What does it cost to own? What warranty is offered?

Harrison F Trucks provides a four-year/130,000km warranty, which it claims is the same as the Ford warranty with standard exclusions. Harrison also provides four-year premium roadside assistance.Scheduled servicing is 12 months/10,000km with costs ranging between $495 and $1400.Harrison says servicing can be done at any certified service department in Australia, with direct communication with Harrison’s service manager if required for diagnostics and advice.

If you’ve got something really heavy to tow and you have the budget to do it in grand style and with minimal effort, then a Super Duty could be just what you’re looking for. Its gargantuan proportions make it impractical for daily driving in Australian city and suburban traffic, but as a heavy-duty tow vehicle, particularly for long-haul open highway work, you’ll feel like king of the road.