First F-150 Black Ops Rolls Off the Line in Oz 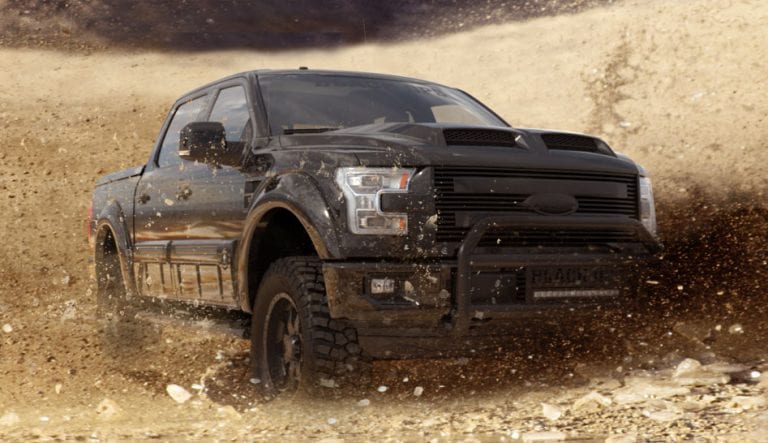 Powered by a Shelby-fettled 5.0-litre supercharged Coyote V8 – and built by Ford US truck hot shop, Tuscany – the limited edition model packs a 507kW (680hp) punch, and is one of just 10 examples already pre-ordered by Australian customers.

While the regular F-150 Black Ops ute is powered by a 294kW (395hp) normally-aspirated version of Ford’s 5.0-litre Coyote, as seen in the Mustang GT, HMG’s first Black Ops customer wanted something “a little bit special”.

“Our first Black-Ops went to a very happy customer in Sydney this week,” HMG spokesperson Will Wyhoon told motoring.com.au.

“The middle-aged businessman flew down to inspect the first locally-converted F-150 Black Ops before handing over the cash, and in his words, ‘you’d never know it was a left-hand drive’.

“He optioned the Whippel supercharger to elevate his Black Ops variant to the same output figure as the Shelby model – it really is a bit of a beast,” Wyhoon exclaimed.

The Black Ops variant is just one of several iterations of the 13th-generation F-150 sold by HMG. The smaller F-Truck joins larger F-250 and F-350 variants, all of which are converted for Harrisons at Coolaroo-based Victorian Development Corporation.

Other local conversion houses such as Queensland-based Performax International offer the majority of F-Series models sold by HMG, but do not have access to the Tuscany-enhanced range.

“Harrison Motoring Group have the exclusive importer license on Tuscany products in the southern hemisphere,” Wyhoon stated. “It gives us the kind of leverage needed to get special models like the F-150 Black Ops in those kinds of numbers.”

The F-150 Black Ops model was designed to honour US servicemen and women, with $200 from the sale of each model supporting the Wounded Warrior Project charity.

Shelby-enhanced models are available in traditional Shelby colours with complementing Shelby livery, Super Snake badging and interior embossing. All limited-edition vehicles are numbered via a plaque on the dash and include the unmistakeable dual-ram bonnet, 18-inch Shelby alloys, Fox shocks and a tuned exhaust.

“We could easily sell more than we could get our hands on,” said Wyhoon. “We’ve recently received our first batch of 10 – which are all accounted for – and have an order bank for any additional units we might get our hands on.”

Tuscany supplies a range of enhanced F-Series vehicles which are sold exclusively through Ford’s US dealer network. In Australia, HMG also exclusively sells Tuscany-tuned F-Series models like the Black Ops, Tonka and the museum-certified Shelby F-150 (whose 507kW V8 is available optionally in other Tuscany models).

Based on the F-150 Lariat, the F-150 Black Ops comes as standard with a fully re-calibrated tyre pressure monitor and speedo, LED headlights and a black grille, flares, dual-ram bonnet, tonneau, bumpers, exhaust tips and badging.

In the US, the model is also offered with a six-inch lift kit.

“Bigger lift kits are available in the US but are not fitted locally owing to ADR compliance,” Wyhoon clarified.

Wyhoon explained that the full range of new F-150 trucks will start to filter through over the coming months, and are now available to order at HMG. He said the right-hand drive conversion process for the new model range is incredibly thorough, and includes fine-tuning the calibration of systems including autonomous emergency braking, adaptive cruise control, lane-departure warning, lane-change assistance and the 360-degree camera.

Regular right-hand drive versions of the F-150 sold by HMG are powered by the choice of a 287kW 5.0-litre petrol V8 or a 272kW 3.5-litre twin-turbo-petrol V6. Five and six-seat iterations are available, as are short and long-wheelbase chassis.

HMG sells the standard F-150 in three trim levels locally: Lariat, King Ranch and Platinum respectively, but says it can access the lower-trim XL and XLT, as well as top-shelf Limited models, if the customer desires. Regular, Super Cab and Crew Cab bodies are available.

Wyhoon explained that exchange rates are responsible for 30 per cent of the list price increase, before shipping, conversion, taxes, warranty, roadside assistance and other costs are factored in.

The new model retains Ford’s 6.7-litre V8 turbo-diesel, six-speed automatic and 4×4 driveline, but like the latest F-150 includes a lighter, new-look aluminium and steel body, and the new range of electronic driver aids seen in the smaller F-truck.